An exhibition of Beatle-inspired works by 42 leading Irish illustrators 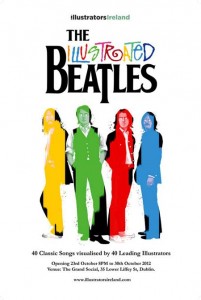 Illustrators Ireland and The Grand Social present an exhibition of artwork inspired by The Beatles. October 23rd 2012.  Creatives, art directors & broadcasters chose their favourite Beatles song. Songs were then allocated to Illustrators Ireland members … who used it as a starting point to influence or inspire a piece of artwork.

The collection of illustrations will be shown at an art event which will be held 23rd October 2012 in The Grand Social Club, 35 Lower Liffey Street.